Replete with engravings, this four-volume work presents details of British and foreign participants at London's International Exhibition of 1862. 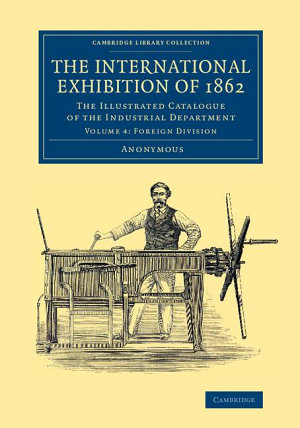 Replete with detailed engravings, this four-volume catalogue was published to accompany the International Exhibition of 1862. Held in South Kensington from May to November, the exhibition showcased the progress made in a diverse range of crafts, trades and industries since the Great Exhibition of 1851. Over 6 million visitors came to view the wares of more than 28,000 exhibitors from Britain, her empire and beyond. Featuring explanatory notes and covering such fields as mining, engineering, textiles, printing and photography, this remains an instructive resource for social and economic historians. The exhibition's Illustrated Record, its Popular Guide and the industrial department's one-volume Official Catalogue have all been reissued in this series. Volume 4 continues to catalogue the Foreign Division. Notable is the appearance of early exhibits from Steinway & Sons in the brief section for the United States. In contrast, Austrian and German exhibits occupy more than 400 pages.